My Drunk Kitchen: A Guide to Eating, Drinking, and Going with Your Gut (Hardcover) 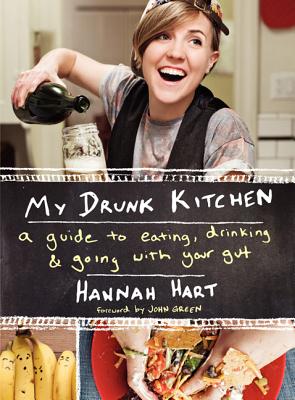 By Hannah Hart
$22.99
Availability to be confirmed

One day, sad cubicle dweller and otherwise bored New York transplant Hannah Hart decided, as a joke, to make a fake cooking show for her friend back in California. She turned on the camera, pulled out some bread and cheese, and then, as one does, started drinking. (Doesn't everyone cook with a spoon in one hand and a bottle of wine in the other?) The video went viral and an online sensation was born.

My Drunk Kitchen includes recipes, stories, full color photos, and drawings to inspire your own culinary adventures in tipsy cooking. It is also a showcase for Hannah Hart's great comedic voice. Hannah offers key drink recommendations, cooking tips (like, remember to turn the oven off when you go to bed) and shares never-before-seen recipes such as:

This is a book for anyone who believes they have what it takes to make a soufflé for the holiday party and show up the person who apparently has nothing better to do than bake things from scratch. It also recommends the drink you'll need to accompany any endeavor of this magnitude. In the end, My Drunk Kitchen may not be your go-to guide for your next dinner party . . . but it will make you laugh and drink . . . I mean think . . . about life.

Hannah Hart is an author, digital influencer, philanthropist, actress, and producer. She is the New York Times bestselling author of My Drunk Kitchen, and the creator and star of the popular and award-winning YouTube series My Drunk Kitchen. Named one of Forbes’ 30 Under 30, Hannah has led a discussion about millennial engagement with President Obama at the White House, and she is founder of the Have a Hart Day initiative, which encourages young leaders to volunteer in their communities. She has coproduced and starred in three films: the independent comedy Camp Takota with fellow YouTubers Grace Helbig and Mamrie Hart, the reboot of 70’s cult classic Electra Woman and Dyna Girl, and the comedy film Dirty30. Hannah lives in Los Angeles and is starting to like it there.

“I defy anyone to read this surprisingly useful book and not come away from it madly in love with Harto, hoping against hope that one day she will turn up, with alcohol and honesty and a heaped pile of humor, in your kitchen too.”
— Neil Gaiman, #1 New York Times bestselling author of The Ocean at the End of the Lane

“Hannah Hart is one of the smartest, funniest humans I know. She has done more than write a book- she has created a delightful hang-out in literary form. This book is my only friend now.”
— Chris Hardwick, founder and CEO of Nerdist Industries

“Maybe cooking isn’t about creating culinarily perfect flavor art—maybe cooking is just part of living a life that you enjoy and that makes the world suck less. I’m not saying Hannah’s food isn’t good, but her ideas are butter...ahem...better.”
— Hank Green, Vlogbrother