Root to Leaf: A Southern Chef Cooks Through the Seasons (Hardcover) 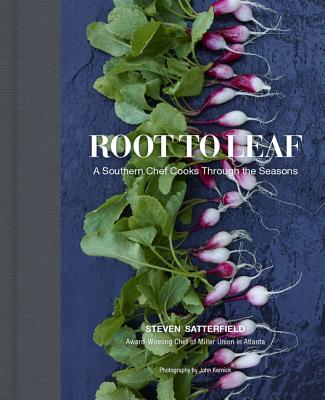 James Beard Award-winning chef of celebrated Atlanta restaurant Miller Union, Steven Satterfield—dubbed the “Vegetable Shaman” by the New York Times’ Sam Sifton—has enchanted diners with his vegetable dishes, capturing the essence of fresh produce through a simple, elegant cooking style. Like his contemporaries April Bloomfield and Fergus Henderson, who use the whole animal from nose to tail in their dishes, Satterfield believes in making the most out of the edible parts of the plant, from root to leaf. Satterfield embodies an authentic approach to farmstead-inspired cooking, incorporating seasonal fresh produce into everyday cuisine. His trademark is simple food and in his creative hands he continually updates the region’s legendary dishes—easy yet sublime fare that can be made in the home kitchen.

Root to Leaf is not a vegetarian cookbook, it’s a cookbook that celebrates the world of fresh produce. Everyone, from the omnivore to the vegan, will find something here. Organized by seasons, and with a decidedly Southern flair, Satterfield's collection mouthwatering recipes make the most of available produce from local markets, foraging, and the home garden. A must-have for the home cook, this beautifully designed cookbook, with its stunning color photographs, elevates the bounty of the fruit and vegetable kingdom as never before.

Steven Satterfield is the executive chef and co-owner of Miller Union in Atlanta, Georgia. He serves on the board of Slow Food Atlanta, started the Atlanta local network of Chefs Collaborative, and is an active member of Georgia Organics and the Southern Foodways Alliance. Satterfield was also nominated for Food & Wine magazine's "People's Best New Chef," following Miller Union's placement on the "Best New Restaurants in America" lists from Bon Appétit and Esquire, as well as Atlanta magazine's "Restaurant of the Year" in 2010. The James Beard Foundation first recognized Miller Union as a semifinalist for the national award of best new restaurant in 2010. Satterfield himself was named Best Chef: Southeast by the James Beard Foundation in 2017.

“An exhaustive and fascinating guide to the four seasons of vegetable life...Root to Leaf offers both philosophy and instruction, with recipes that reward, again and again, the minimal treatment of the very best ingredients.”
— Sam Sifton, New York Times

“Nose to tail, meet root to leaf. Grounded by simple, approachable recipes and elevated by lush photographs, this hefty book by chef Steven Satterfield provides a practical and gorgeous guide for shopping and cooking through the seasons.”
— Cooking Light

“A visual treasure that’s too useful to relegate to the coffee table.”
— Real Simple

“New Southern cooking at its best.”
— Self magazine, online

“These are recipes for those who care passionately about what they eat, with a reverential commitment to the beauty, taste, provenance, and possibilities of each ingredient.”
— cookbooks365.com

“Quite a few books that talk about seasonality, but this is one of the few that completely embraces it.”
— Munching on Books

“A leafy response to the nose-to-tail food movement. Satterfield has developed a keen sense of how best to fully use in-season produce in this vegetable-first cookbook.”
— Christian Science Monitor