The Whispering Trees (The Thickety #2) (Paperback) 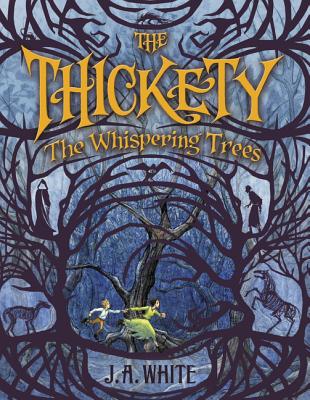 By J. A. White, Andrea Offermann (Illustrator)
$7.99
Availability to be confirmed

This is book number 2 in the The Thickety series.

Perfect for fans of Neil Gaiman, book two in the acclaimed Thickety series is the story of a good witch, a bad witch, and a forest demon, trapped together in a world that is both enchanting and dangerous.

After Kara Westfall's village turns on her for practicing witchcraft, she and her brother, Taff, flee to the one place they know they won't be followed: the Thickety. Only this time Kara is magicless without her grimoire and Sordyr, the forest demon, is intent on keeping them there. Kara and Taff will meet other inhabitants of the Thickety in their search for a safe way out, including the infamous witch, Mary Kettle. But can they trust anyone—plant, creature, witch, book, or magic—to help them escape, to undo Grace's final terrible spell, and to stop Sordyr's horrible reach from spreading across the rest of the world?

“The Thickety: The Whispering Trees is a thrilling sequel: a whirlwind of suspense and twists. J.A. White isn’t just a fantastic writer and storyteller - he spins myths that feel as old as the Thickety itself. A must-read series for every age.”
— Soman Chainani, New York Times bestselling author of The School for Good and Evil

“With a plot that coils like a tangle of brambles and an ending no less twisty than that of its predecessor, this sequel will keep readers invested in Kara and Taff’s adventures in this dangerous and imaginative world.”
— Publishers Weekly (starred review)

“An exceptionally well-written and compelling sequel.”
— Bulletin of the Center for Children’s Books (starred review)

“This title has all the ingredients-a doughty heroine and her admirable younger brother, an unreliable guide who can’t stay the same age for long, and a heavy “ick” factor-to keep readers glued to it.”
— Kirkus Reviews

“The nail-biting suspense will keep readers turning the pages late into the night, and in Kara, readers will find a protagonist to root for. Readers who enjoyed the spine-chilling first installment will be eager to get their hands on this sequel.”
— School Library Journal

Praise for THE THICKETY: A PATH BEGINS: “The spellbinding story, lashings of suspense and stalwart heroine will draw in fantasy fans and keep them reading until the bitter ending.”
— Kirkus Reviews (starred review)

“White creates a fantasy world with creatures that are anything but sweet and his prose is evocative without being dense. Absolutely thrilling.”
— Publishers Weekly (starred review)

“A startling plot twist at the end will have readers urgently waiting for a sequel, and it may lead them right back into the book to see if they missed earlier clues.”
— Bulletin of the Center for Children’s Books