The Lies About Truth (Paperback) 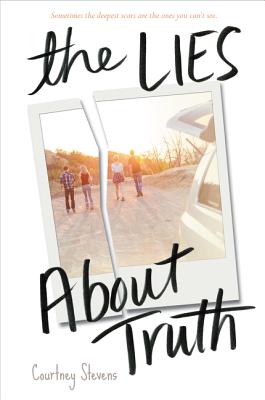 The Lies About Truth (Paperback)

This story from Courtney Stevens—the gifted author of Faking Normal—about hope and courage and the struggle to overcome the pain of loss will appeal to fans of Jandy Nelson's and Gayle Forman’s emotionally gripping novels.

Sadie Kingston is living in the aftermath. A year after surviving a car accident that killed her friend Trent and left her body and face scarred, she can't move forward. The only person who seems to understand her is Trent's brother, Max.

As Sadie begins to fall for Max, she's unsure if she is truly healed enough to be with him. But Max looks at her scars and doesn't shy away. And Max knows about the list she writes in the sand at the beach every night, the list of things that Sadie knows she must accomplish before she can move on from the accident. And while he can help her with number six (kiss someone without flinching), she knows she's on her own with number three (forgive Gina and Gray) and the rest of the seemingly impossible tasks that must be made possible before she can live in the now again.

“This realistic YA novel explores the weight of the past, the value of the truth, and the meaning and process of forgiveness, which teen readers will identify with. A great addition to any YA collection”
— School Library Journal

“No one writes better about resilience and ‘channeling your brave’ than Stevens does.”
— --Cammie McGovern, author of Say What You Will

“This lyrical novel explores loss and survivor’s guilt, friendship and trust, and grieving and moving forward through the heart of a young woman who has lost much and yet feels paralyzed to reclaim her life.”
— ALA Booklist

PRAISE FOR FAKING NORMAL: “Somewhere between Sarah Dessen and Laurie Halse Anderson lies Stevens’s rich debut about two adolescents grappling with extraordinary trauma....the mood is intense and the story moves briskly, complete with an ending so surprising that some readers may flip back to the beginning to start fresh.”
— Publishers Weekly

PRAISE FOR FAKING NORMAL: “Reminiscent of Melinda in Speak, Alexi tries to find her voice. A story that resonates.”
— Kirkus Reviews

PRAISE FOR FAKING NORMAL: “Debut novelist Stevens has written a powerful and fast-paced first-person story of a young woman who finds an inner strength she never knew she possessed.”
— Voice of Youth Advocates (VOYA)