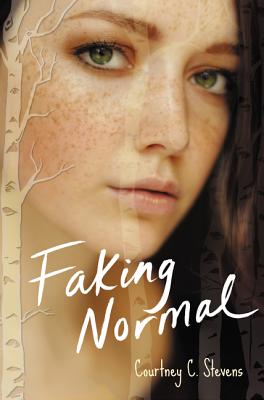 An edgy, realistic debut novel praised by the New York Times bestselling author of Between Shades of Gray, Ruta Sepetys, as “a beautiful reminder that amid our broken pieces we can truly find ourselves.”

Alexi Littrell hasn’t told anyone what happened to her over the summer by her backyard pool. Instead, she hides in her closet, counts the slats in the air vent, and compulsively scratches the back of her neck, trying to make the outside hurt more than the inside does—and deal with the trauma.

When Bodee Lennox—“the Kool-Aid Kid”—moves in with the Littrells after a family tragedy, Alexi discovers an unlikely friend in this quiet, awkward boy who has secrets of his own. As their friendship grows, Alexi gives him the strength to deal with his past, and Bodee helps her summon the courage to find her voice and speak up about the rape that has changed the course of her life.

Courtney “Court” Stevens grew up among rivers, cornfields, churches, and gossip in the small-town South. She is a former adjunct professor, youth minister, and Olympic torch bearer. She has a pet whale named Herman, a band saw named Rex, and several books with her name on the spine: Faking Normal, The Lies About Truth, and the e-novella The Blue-Haired Boy. She lives in Nashville, Tennessee. You can visit her online at www.courtneycstevens.com.

“A beautiful reminder that amidst our broken pieces we can truly find ourselves.” — Ruta Sepetys, New York Times Bestselling Author of Between Shades of Gray

“Somewhere between Sarah Dessen and Laurie Halse Anderson lies Stevens’s rich debut about two adolescents grappling with extraordinary trauma....the mood is intense and the story moves briskly, complete with an ending so surprising that some readers may flip back to the beginning to start fresh.” — Publishers Weekly

“Reminiscent of Melinda in Speak, Alexi tries to find her voice. A story that resonates.” — Kirkus Reviews

“Debut novelist Stevens has written a powerful and fast-paced first-person story of a young woman who finds an inner strength she never knew she possessed.” — Voice of Youth Advocates (VOYA)