Elvis and the Underdogs (Paperback) 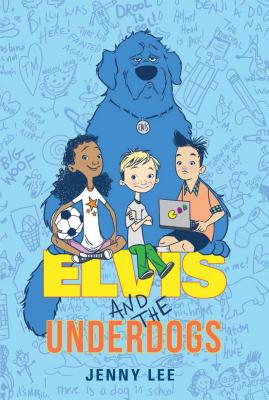 Elvis and the Underdogs (Paperback)

From Jenny Lee, writer on the Disney Channel show Shake It Up!, the number-one-rated kids' show in the country, this feel-good middle-grade novel is about a sickly boy whose life is turned upside down when he gets a therapy dog . . . who can talk!

Benji Wendell Barnsworth is a small ten-year-old boy with a big personality. Born premature, Benji is sickly, accident-prone, and at the hospital so often he even has his own punch card. So when Benji wakes up one day from a particularly bad spell, his doctors take the radical step of suggesting he get a therapy dog. But when a massive crate arrives at Benji's house, out walks a two-hundred-pound Newfoundland who can talk! And boy, is he bossy.

In this hilarious and heartwarming friendship story in the tradition of bestselling authors Gordon Korman and Carl Hiaasen, Elvis brings out the dog lover in the most surprising people and shows Benji that making new friends may not be as scary as he once thought.

Jenny Lee is a writer and producer on the new ABC Family sitcom Young & Hungry. She was also a writer and producer of the TBS sitcom Ground Floor and the Disney Channel's number-one-rated kids' show Shake It Up for all three seasons. The author of four humor essay books, Jenny is also the author of Elvis and the Underdogs. She lives in Los Angeles with her 110-pound Newfoundland, Doozy (and yes, it's a toss-up on who's walking whom every day).

Kelly Light is an author and illustrator who now lives in New York but grew up down the shore in New Jersey surrounded by giant pink dinosaurs, cotton candy colors, and Skee-Ball sounds. She was schooled on Saturday-morning cartoons and Sunday funny pages. She picked up a pencil, started drawing, and never stopped. She has illustrated two chapter book series: Elvis and the Underdogs by Jenny Lee, and the Quirks by Erin Soderberg. She is the author-illustrator of Louise Loves Art and Louise and Andie.

Find her online at www.kellylight.com.

“This children’s book debut from Lee, a writer and producer on Disney’s ‘Shake It Up’ sitcom (and clearly a dog lover), is suffused with optimism.” — Publishers Weekly

“That Elvis is a dog of dogs: the smartest, the bravest, the funniest. Also, the biggest. No wonder Benji’s adventures with him are hilarious and action-packed! Such a very fun read.” — Emily Jenkins, author of INVISIBLE INKLING and TOYS GO OUT

“It’s impossible not to fall in love with Elvis and Benji. And here I thought I was the only person who actually had conversations with his dog…” — Chris Rylander, author of THE FOURTH STALL