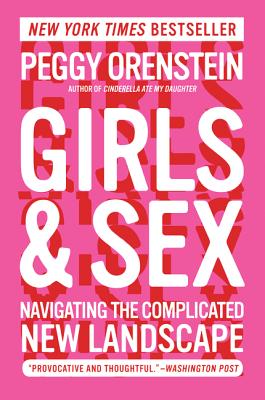 The author of the New York Times bestseller Cinderella Ate My Daughter offers a clear-eyed picture of the new sexual landscape girls face in the post-princess stage—high school through college—and reveals how they are negotiating it.

A generation gap has emerged between parents and their girls. Even in this age of helicopter parenting, the mothers and fathers of tomorrow’s women have little idea what their daughters are up to sexually or how they feel about it. Drawing on in-depth interviews with over seventy young women and a wide range of psychologists, academics, and experts, renowned journalist Peggy Orenstein goes where most others fear to tread, pulling back the curtain on the hidden truths, hard lessons, and important possibilities of girls’ sex lives in the modern world.

While the media has focused—often to sensational effect—on the rise of casual sex and the prevalence of rape on campus, in Girls and Sex Peggy Orenstein brings much more to the table. She examines the ways in which porn and all its sexual myths have seeped into young people’s lives; what it means to be the “the perfect slut” and why many girls scorn virginity; the complicated terrain of hookup culture and the unfortunate realities surrounding assault. In Orenstein’s hands these issues are never reduced to simplistic “truths;” rather, her powerful reporting opens up a dialogue on a potent, often silent, subtext of American life today—giving readers comprehensive and in-depth information with which to understand, and navigate, this complicated new world.

Peggy Orenstein is the New York Times bestselling author of Boys & Sex, Don’t Call Me Princess, Girls & Sex, Cinderella Ate My Daughter, Waiting for Daisy, Flux, and Schoolgirls. A contributing writer for the New York Times Magazine and Afar, she has also been published in New York, The Atlantic, The New Yorker, and other publications. Her TED Talk has received over five million views. She lives in Northern California with her husband and daughter.

“Provocative and thoughtful.... Both an examination of sexual culture and a guide on how to improve it.... The breadth of Orenstein’s reporting ... is impressive.” — Laura Stepp, Washington Post

“Nonsensational but deeply entertaining…. A must-read.” — People, Book of the Week

“An honest and thoughtful exploration.... It would be easy to pigeonhole Girls & Sex as essential reading only for parents of female teens or preteens.... [But] this book is for anyone who cares for a girl approaching womanhood.” — Adrian Liang, Amazon Best Book of the Month citation

“A nuanced read for anyone who remembers being a young woman and anyone who is raising the next generation of girls (and boys) for whom we hope the future holds sexual satisfaction, not pain or disappointment.” — Rebecca Traister, More

“I’m not going to tell you to go right now and buy a copy…. I’m going to tell you to buy two copies: One for yourself, and one for the teenager in your life…. Refuses to be judgmental or doom and gloom. Instead, it offers something else — a demand for education, enlightenment, and ultimately, the radical notion of equal satisfaction.” — Mary Elizabeth Williams, Salon

“I’m not going to tell you to go right now and buy a copy…. I’m going to tell you to buy two copies: One for yourself, and one for the teenager in your life…. Refuses to be judgmental or doom and gloom. Instead, it offers something else — a demand for education, enlightenment, and ultimately, the radical notion of equal satisfaction.” — Adrian Liang, Amazon Best Book of the Month citation

“Girls & Sex should be mandatory for anyone who cares about the present and future cultural landscape for girls, women, humans. I seriously want to quit my job and tour the country, furiously hawking Peggy Orenstein’s insightful, important book.” — Rashida Jones, actress, writer, producer

“[An] important new book.... Her writing is clear and compelling, her analysis is incisive and thorough, and her findings are downright troubling.” — Sharon Holbrook, Washington Post

“Fascinating…. A wise and sharply argued look at how girls are navigating ‘the complicated new landscape’ of sex and sexuality.” — Economist

“An intimate view of the sex lives of young women in the United States. While revealing disturbing common threads… Orenstein brings levity to this fraught topic.” — Elle

“’Girls & Sex’ may do more to change how sex education is rethought and how parents and daughters discuss pleasure and sexuality than any book since the landmark ‘Our Bodies, Ourselves.’” — Tamara Straus, San Francisco Chronicle

“If you’re going to talk about women in the 21st century, you MUST read Peggy Orenstein’s Girls & Sex. No one else is asking these questions; so no one else, then, is finding out the answers.” — Caitlin Moran, Author of How to Be a Woman

“With compassion and insight, Peggy Orenstein holds a mirror not only to girls’ experiences but to our own judgments. No less than the emotional health and physical safety of our daughters (and of our sons, by the way) depends on the kind of insight Girls & Sex provides.” — Rosalind Wiseman, author of Queen Bees and Wannabes

“Peggy Orenstein sheds light on an important and too often misunderstood topic. Her reporting shows how a healthy and direct approach to sexuality is a key component of gender equality.” — Sheryl Sandberg, COO of Facebook and founder of LeanIn.Org

“An enlightening, sad and shocking look into the minds of teenagers and their views on casual sex, love and relationships.” — Aimee Blanchette, Minneapolis Star Tribune

“Orenstein has compiled an eye-opening study of the way that girls and women in America think, feel, and act regarding sex…. The abundant information she provides will give parents and young girls the power to make informed decisions regarding sex.” — Kirkus

“Accessible prose and narrative style will bring the work of many thoughtful experts to a wider audience…. Young adults, parents, educators, and activists alike will find this passionate work a timely conversation starter.” — Library Journal

“Sex and teenagers have always gone together, but parents reading Orenstein’s frank exploration of current trends may still be in for a shock…. This isn’t a comfortable book to read (Orenstein herself admits twinges a few times), but it’s an important one.” — Booklist

“Orenstein is such a breezy, funny, writer, it’s easy to forget she’s an important thinker too.” — People, four stars, on Cinderella Ate My Daughter