Great by Choice: Uncertainty, Chaos, and Luck--Why Some Thrive Despite Them All (Good to Great #5) (Hardcover) 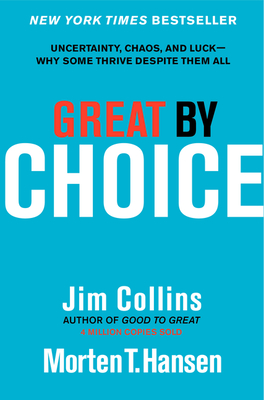 Great by Choice: Uncertainty, Chaos, and Luck--Why Some Thrive Despite Them All (Good to Great #5) (Hardcover)

This is book number 5 in the Good to Great series.

Ten years after the worldwide bestseller Good to Great, Jim Collins returns withanother groundbreaking work, this time to ask: why do some companies thrive inuncertainty, even chaos, and others do not? Based on nine years of research,buttressed by rigorous analysis and infused with engaging stories, Collins andhis colleague Morten Hansen enumerate the principles for building a truly greatenterprise in unpredictable, tumultuous and fast-moving times. This book isclassic Collins: contrarian, data-driven and uplifting.

Jim Collins is a student and teacher of what makes great companies tick, and a Socratic advisor to leaders in the business and social sectors. Having invested more than a quarter-century in rigorous research, he has authored or coauthored six books that have sold in total more than 10 million copies worldwide. They include Good to Great, Built to Last, How the Mighty Fall, and Great by Choice.

Driven by a relentless curiosity, Jim began his research and teaching career on the faculty at the Stanford Graduate School of Business, where he received the Distinguished Teaching Award in 1992. In 1995, he founded a management laboratory in Boulder, Colorado.

In addition to his work in the business sector, Jim has a passion for learning and teaching in the social sectors, including education, healthcare, government, faith-based organizations, social ventures, and cause-driven nonprofits.

In 2012 and 2013, he had the honor to serve a two-year appointment as the Class of 1951 Chair for the Study of Leadership at the United States Military Academy at West Point. In 2017, Forbes selected Jim as one of the 100 Greatest Living Business Minds.

Jim has been an avid rock climber for more than forty years and has completed single-day ascents of El Capitan and Half Dome in Yosemite Valley.

Learn more about Jim and his concepts at his website, where you’ll find articles, videos, and useful tools. jimcollins.com

Morten T. Hansen is a management professor at the University of California, Berkeley (School of Information), and at INSEAD. Formerly a professor at Harvard Business School, Morten holds a PhD from Stanford Graduate School of Business, where he was a Fulbright scholar. He is the author of Collaboration and the winner of the Administrative Science Quarterly Award for exceptional contributions to the field of organization studies. Previously a manager with the Boston Consulting Group, Morten consults and gives talks for companies worldwide.

“Collins and Hansen draw some interesting and counterintuitive conclusions from their research….far from a dry work of social science. Mr. Collins has a way with words, not least with metaphor.” — Wall Street Journal

Entrepreneurs and business leaders may find the concepts in this book useful for making choices to increase their odds of building a great company. — Booklist