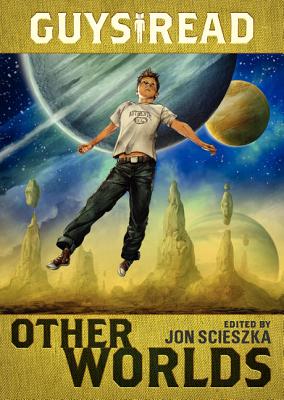 This is book number 4 in the Guys Read series.

Other Worlds, the fourth volume in Jon Scieszka’s Guys Read anthology series for tween boys, features ten thrilling new tales of science fiction and fantasy from some of the biggest names in children’s literature.

Prepare yourself for ten trips into the unknown, as ten of your favorite writers—Rick Riordan, who has written an all-new and exclusive Percy Jackson tale, Tom Angleberger of Origami Yoda fame, Newbery medalist Rebecca Stead, Shannon Hale, D. J. MacHale, Eric Nylund, Kenneth Oppel, Neal Shusterman, Shaun Tan, and none other than the late Ray Bradbury—spin tales of fantasy and science fiction the likes of which you have never imagined.

Compiled by National Ambassador for Children’s Literature (and Secret Ambassador for the Intergalactic Alliance) Jon Scieszka, Guys Read: Other Worlds is sure to boldly take you where no reader has gone before.

Greg Ruth (Illustrator) has created countless comic books for Dark Horse and other publishers, and has worked on videos for Prince and Rob Thomas, among others. He has also illustrated many children’s books as well as graphic novels. He lives with his family in Massachusetts.

Tom Angleberger ("Rise of the RoboShoes™") began writing his first novel in eighth grade, but never completed it. Since then, he’s been a newspaper reporter and columnist, a juggler, a weed boy, a lawn-mower-part assembler, and a biology research assistant. This bestselling author insists he’s not really all that creative—"I’m more of a puzzle-putter-together."

D. J. MacHale ("The Scout") is a bestselling author and is also a director, executive producer, and creator of several popular television series and movies. He lives in Southern California with his family, where they spend a lot of time backpacking, scuba diving, and skiing

Rebecca Stead ("Plan B") went to the kind of elementary school where a person could sit on a windowsill or even under a table to read a book, and no one told you to come out and be serious. After trying to be serious as a lawyer for a while, she decided to be a full-time writer. Her book When You Reach Me was awarded the Newbery Medal in 2010 and was a New York Times bestseller. She lives in New York City with her family.

In a career spanning more than seventy years, Ray Bradbury inspired generations of readers to dream, think, and create. A prolific author of hundreds of short stories and close to fifty books, as well as numerous poems, essays, operas, plays, and screenplays, Bradbury was one of the most celebrated writers of our time. His groundbreaking works include Fahrenheit 451, The Martian Chronicles, The Illustrated Man, Dandelion Wine, and Something Wicked This Way Comes. An Emmy Award winner for his teleplay The Halloween Tree and an Academy Award nominee, he was the recipient of the 2000 National Book Foundation Medal for Distinguished Contribution to American Letters, the 2004 National Medal of Arts, and the 2007 Pulitzer Prize Special Citation, among many honors.

Shaun Tan ("A Day in the Life") grew up in Perth, Western Australia, and made up for the fact that he was the shortest kid in every class by being known as a "good drawer." Besides working full-time as an illustrator of his own stories, Shaun has worked as a designer in theater and film, and also directed the Academy Award–winning short film The Lost Thing.

Neal Shusterman is the New York Times bestselling and award-winning author over thirty books, including Challenger Deep, which won the National Book Award; Scythe, a Michael L. Printz Honor Book; Dry, which he co-wrote with his son, Jarrod Shusterman; Unwind, which won more than thirty domestic and international awards; Bruiser, which was on a dozen state lists; The Schwa Was Here, winner of the Boston Globe Horn Book Award. His latest book, Game Changer, debuted as an indie top-five best seller.  You can visit him online at www.storyman.com.

Shannon Hale ("Bouncing the Grinning Goat") began writing at age ten—mostly fantasy stories where she was the heroine. She never stopped. She writes bestselling books for kids and adults and also writes graphic novels. Her book Princess Academy was named a Newbery Honor Book in 2006. Shannon lives with her family near Salt Lake City, Utah.

KENNETH OPPEL is one of the most highly regarded authors of middle-grade fiction writing today. In addition to the Bloom trilogy, some of his best-known titles are Inkling, a New York Times notable book and a New York Public Library best book of the year; The Nest, which was named a New York Times editors’ choice and best book of the year by the CLA, the Globe and Mail, Publishers Weekly, the Wall Street Journal and Booklist, among others; Airborn, winner of the Governor General’s Literary Award and a Printz Honor Book; and the million-copy-selling Silverwing trilogy. Born on Vancouver Island, Oppel has lived in Nova Scotia and Newfoundland, as well as England and Ireland. He now resides in Toronto with his wife and children. Find him online at www.kennethoppel.ca and @KennethOppel.

Eric Nylund ("The Warlords of Recess") is a New York Times bestselling and World Fantasy Award–nominated author of fourteen published science fiction, fantasy, and YA novels. His latest is a science fiction series for young readers, The Resisters. Eric also works for Microsoft Studios, where he makes video games.