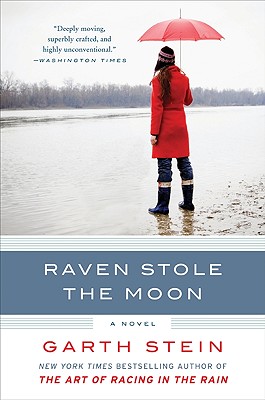 Raven Stole the Moon is the stunning first novel from Garth Stein, author of the phenomenal New York Times bestseller The Art of Racing in the Rain.

A profoundly poignant and unforgettable story of a grieving mother’s return to a remote Alaskan town to make peace with the loss of her young son, Raven Stole the Moon combines intense emotion with Native American mysticism and a timeless and terrifying mystery, and earned raves for a young writer and his uniquely captivating imagination.

According to the Fort Worth Star-Telegram, this remarkable novel “serves notice that Stein is a rare talent.”

Garth Stein is the author of Enzo Races in the Rain!, based on the New York Times bestselling novel The Art of Racing in the Rain (and its tween adaptation, Racing in the Rain). His other works include A Sudden Light, How Evan Broke His Head and Other Secrets, Raven Stole the Moon, and a play, Brother Jones. He is the cofounder of Seattle7Writers.org, a nonprofit collective of sixty-two Northwest authors dedicated to fostering a passion for the written word. Garth lives in Seattle with his family and his dog, Comet.

“An unpredictable and absorbing debut… Stein intriguingly blurs the line between legend and conventional reality…. A moving tale.” — Publishers Weekly