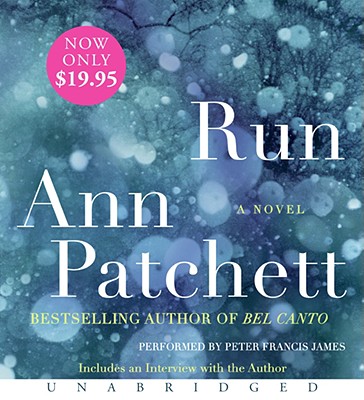 It’s a winter evening in Boston and the temperature has drastically dropped as a blizzard approaches the city. On this fateful night, Bernard Doyle plans to meet his two adopted sons, Tip the older, and more serious and Teddy, the affectionate dreamer, at a Harvard auditorium to hear a speech given by Jesse Jackson. Doyle, an Irish Catholic and former Boston mayor, has done his best to keep his two sons interested in politics, from the day he and his now deceased wife became their parents, through their childhoods, and now in their lives as college students. Though the two boys are African-American, the bonds of the family’s love have never been tested. But as the snow begins to fall, an accident triggers into motion a series of events that will forever change their lives.

Run is at its very center, is a novel about what truly defines family and the lengths we will go to protect our children. As she did in her bestselling novel Bel Canto, Patchett beautifully weaves together seemingly disparate lives to show how intimately humans can connect. Stunning and powerful, Run is sure to engage any Patchett fan and bring her even more admirers.

Peter Francis James has starred in numerous Broadway and off-Broadway productions, as well as on such television programs as Law & Order: Special Victims Unit, New York Undercover and State of Affairs.