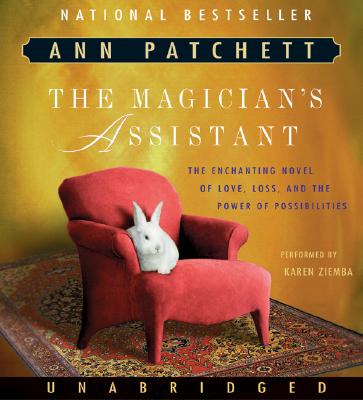 By Ann Patchett, Karen Ziemba (Read by)
$39.95
Availability to be confirmed

When Parsifal, a handsome and charming magician, dies suddenly, his widow Sabine—who was also his faithful assistant for twenty years—learns that the family he claimed to have lost in a tragic accident is very much alive and well. Sabine is left to unravel his secrets, and the adventure she embarks upon, from sunny Los Angeles to the bitter windswept plains of Nebraska, will work its own magic on her. Sabine's extraordinary tale captures the hearts of its readers just as Sabine is captured by her quest.

is the author of seven novels and three works of nonfiction. She is the winner of the PEN/Faulkner Award, England's Orange Prize, and the Book Sense Book of the Year, and was named one of Time magazine's 100 Most Influential People in the World. Her work has been translated into more than thirty languages. She is the co-owner of Parnassus Books in Nashville, Tennessee, where she lives with her husband, Karl, and their dog, Sparky. annpatchett.com.